BVDP "Are you talking to me?" project presentation

"Are you talking to me?"

As a lebanese living in Beirut, loving either to walk or to drive (my car in my closed bubble) the city streets, I never take the Service.
I thought of these journeys as a reconciliation between the Service and me. Even though the sticker on the front shield says Public Transportation, making it public space by law, it seems to me every time I open the service door, as if I am going into the living room of perfect strangers, and making myself confortable there, it is the driver's car after all : he choose to put this chain decoration hanging by the mirror.


If a Public transport system, the service, is not used to go from destinaion A to Destination B, but rather for a "Kasdoura", a wander around the city by car, it can become the destination. The public space where interactions can occur.
This happened when I took the Service in Mousaytbeh, next to the Lebanese International University, he had already three girls waiting in the car for him to go, so when I approached him and asked if he would take me to Manara, He replied : "Sorry, but I am going into Dayieh", waiting for one more passenger to fill the car before going. So I hopped in, explaining that I do not have a plan, and "car wandering" in Dahieh seemed like a nice ride. 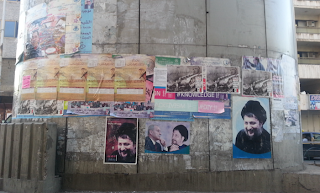 As many lebanese who spend a lot of time on the streets, he had plenty of stories to share, all while explaining where we are, shouting out to people blocking the road, and giving hints about the area... "in the old time, taxis, used special parking spaces as Stations, and people would come and find them there, now I use the University corner on Salim Slem as my station, I was the first one there, 9 years ago",  "university students are the best costumers, before that I was a salesperson for a pharmaceutical company, I know all the pharmacists." , "here is Alhassanayn Mosque" , "I used to own a 1965 Mercedes, but with the rise of gas prices I had to exchange it with this poor car",  "This is the area rebuilt by Hizbolla after 2006", "this is where big demonstrations happen" , "this is the furniture street, but it is bad quality", ... 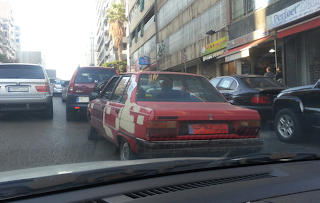 As he knows all the small streets, he brags saying "this car never stops,  I always know how to avoid the traffic jam" and, building on this fact, he continues telling one of the most bizarre stories that happened to him years ago, but that he will never forget, he says :
"One time, I picked a girl from Zkak el Blat and she wanted to go to the Beirut Arab University, it was her first day at the university. She had gone their once or twice before to register. The traffic Jam looked unbearable, so I went off the highway to smaller streets, trying to avoid the traffic. As I was driving, she said that this is not the way to go there, so I explain to her, that this way goes faster, and that she will be there in no time, as I was driving, she opened the door and jumped outside the car, it is good I was not going to fast, but the car was moving, ... and she never paid her fare, while ruining the door of my car" 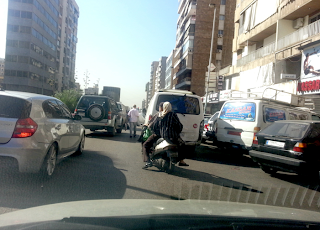 Our ride ended right where it had started on Salim Slem highway, just above the long dark tunnel (the one that stinks and makes you close the windows). This wander around the city suburbs and back, is like a roller-coaster ride, full of happenings and banalities too. It is entertaining, as long as you are in the mood for surprises and accept the unexpected (delays/ very talkative driver or passanger/ very silent uneasy mood/...), in this "payable public seat", on a journey to see. 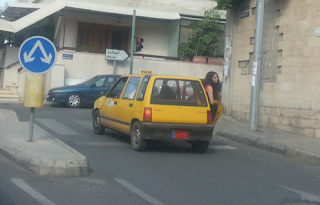