Beirut, Its Map, the streets and the latest events. 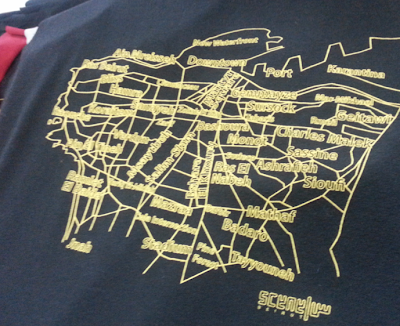 Two weeks ago, I was working on my latest designs before silkscreening them, one being the above pictured, map of Beirut, naming the different areas of the city.
Then, I had an art workshop, last week, with Bik Van Der Pol, related to public space and public transport, so I thought to put on hold my design and pursue this art/public space project, knowing how rare they are in the city, and with my busy schedule, collaborations are the best, when doing collateral interest work.

During the workshop, that ended on Thursday 18th of October, one day before the bombing, I was taking the shared taxi, the service, and having chats with the drivers, touring around Beirut, aimlessly, (I will blog more about that next.) So I went from Ashrafieh to Salim Slem, to Tariq El Matar and Dahieh, working on my fieldwork, sightseeing all Beirut. And, I owned my city.

Today, as I was printing the map on the t-shirts, with my "Scene" products being mostly appreciated by foreigners or expats, it occured to me that, we as Lebanese, living in Lebanon, should start to embrace all of Lebanon, and own all of our country, and what I had designed 2 weeks ago, portraying my interest in the city and its neighborhoods, was suddenly put at risk, also, the project we had done last week, was impossible to do this week. Suddenly, some people decided that some neighborhoods are not mine to go to; I refuse that, I love Beirut, all of Beirut, and politicians playing muppets with some teenagers or thugs is not something we should accept, let alone applause (or reply to similarly)

Claim your voice, your independent opinion, and think, and when you are voting next time, don't go to the same old, same old, where nothing can change. Change things, with your vote and with your acts of everyday. I won't tell you to whom to vote, I don't know, just not those same people here now, change things so you can equally appreciate having a walk from Mar Mikhael to Ras Beirut since it is a long straight line, that you can even bike, going to ABC mall for brands, shopping cheap furniture in Ouzai, sitting in Sioufi garden using the free wi-fi, shopping for crafts and sewing supplies in Dahieh, or going aimlessly in a service to an area you haven't been to lately or ever, because it is for 2000 LL and you have got the time for once, and feeling safe and welcomed, even if your hosting crowd does not look like you, dress like you or believe in the same things you believe in. Come on, give it a try, you might actually enjoy it and discover things.

I write that, and it sounds at the same time so obvious yet, not really so.


PS: I don't usually like to give advice sounding like I am telling people how they should live their lives, but extreme events call for extreme measures.